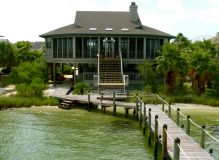 Beautiful views and gracious, custom built home. The main level is upstairs where an open floor plan provides unbelievable views from the kitchen, dining area, and great room. This area has granite counter tops, hardwood floors, vaulted ceiling, and fireplace. The three upstairs bedrooms are carpeted. The great room and two of the bedrooms open out onto a large porch.The downstairs has Mexican tile and the fourth bedroom, bath, and laundry room. The bedroom/TV room opens out to the downstairs porch which has additional seating areas and a Green Egg for grilling.We find that we spend most of our time out on the dock. Take a book and an iPod and you are set for the day! A storage room on the dock has a small refrigerator so there's no need to walk back up to the house for another beverage. We have 2 kayaks so you must explore the islands within 300 yards from our dock.

Ono Island was first discovered by the Spanish in the late 1400's. It is nestled north of Perdido Key, a natural barrier island in Florida. The island meanders for approximately 5.5 miles with its' western tip no more than 500 yards from the entrance to the Gulf of Mexico. Bordered on its south side by Old River and on its north side by Bayou St. John and the Intracoastal waterway. Access to the island is limited to a single bridge complimented by 24 hour security. Quiet streets and boulevards make biking, jogging and conversation with your neighbors pleasurable. Public airports are located in Mobile, Alabama and Pensacola, Florida. The coastal villages of Gulf Shores and Orange Beach, both in Alabama, offer casual and fine dining. Quaint shops abound with the 150 store Riviera Center Outlet Mall just a few minutes away. Ono Island offers the fisherman exceptional angling from redfish to speckled trout from one's own pier. Some of North America's best sportfishing is available with the Mobile Big Game Club being a short ride by skiff from Ono. Great Bass and Crappie abound in Lake Shelby, the 900 Acre freshwater lake which has the distinction of being the closest in proximity of fresh water to salt water to any body of water in North America.

Please visit the Orange Beach Community website at www.orangebeach.ws for a listing of all the things to do in our area.

The downstairs bedroom is a large bedroom and TV room combination. It has 2 twin beds. One of the twins is a trundle so there are essentially 3 twin beds or the trundle arranges as a queen.

Pensacola, Fl airport is 37 miles (45 minutes) away. Mobile, AL airport is 73 miles. Depending on where you are flying from you may want to consider flying into New Orleans, LA. The driving time is less than 4 hours to Ono Island. And you could always spend a day or two enjoying New Orleans!

A rental car would be the best mode of transportation.

Very comfortable and well equipped home. Wonderfully helpful owners. Great location overlooking the Bayou. Northern exposure and well removed from the busy beach strip, but very convenient access to the free Gulf Coast beaches (less than a 5 minute drive) and all the local attractions. Spring was a nice time to visit (less crowded and easier to get around), although early March was a bit early for swimming. Convenient to Pensacola FL, Mobile AL, and the entire Alabama coast.