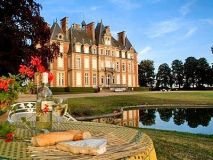 Chateau de la Trousse is a very historically important property being one of the very few Chateaux to survive WWI and the Battle of the Marne.  In fact, the Germans actually reached the entry drive to the Chateau but got no farther.  In gratitude, the owners placed a cross at the foot of the drive in honor of the US soldiers who fought there.  The Chateau is even rarer in that it is in private hands despite its historical significance.

The original Chateau plus the Orangerie and Cour d’ Honour were built between 1630 – 1640 by the family of Phillipe-August Le Hardy.   The estate was owned and run by the le Hardy family until around the 1780s when the main Chateau went to ruin, whilst being dismantled and the building materials sold to help the family’s financial troubles.

In 1791 Charles-Guillaume Baudon de Mony bought the estate. The Baudon de Mony family built the current Chateau in 1864 and had a small church built into the west front quarter. At around the same time the front of the Cour d’ Honour was converted into a stable block and throughout the 19th century it was a thriving working estate.

The 20th and 21st centuries

In the 20th century the estate managed to change with the times converting other buildings in the Cour from Carriage & horse drawn equipment storage to automotive vehicle storage and workshops. All the estate buildings came through both world wars undamaged. The Chateau was occupied first by the Germans and then the Americans in the 2nd world war.  There are pictures of exploded tanks on the driveway and in the surrounding fields.  The Chateau and estate belonged to the Baudon de Mony family until it was purchased in 1998 by the current Co-Ownership.

One of approximately 30 privately owned apartments, this studio apartment has been freshly painted and updated.

Although small (approx 25 metres square) this apartment doesn't feel cramped as it has two really nice large windows, high ceilings, light walls and good lighting. It only has a very small, updated tiled bathroom with a shower, wc and a pedestal sink. It has a small modern, partial kitchen with a small built-in cabinet refridgerator, microwave oven, sink, toaster, coffee maker, hot pot, water purification system, steamer, and all new dishes, utensils, etc. There is no stove or cooktop in the apartment- just the microwave. We do not allow any flames or candles, etc. in our apartment in order to minimize any fire hazard.

We also have a brand new top of the line temperpedic bed. There is a brand new, large flat screened TV, DVD player, iPod dock, alarm clock, internet and telephone in the apartment.

Guests have access to the swimming pool (seasonally), tennis courts, and the beautiful grounds in general.

Paris is only 45 minutes away.

Chateau de la Trousse is located on the D 401 within ten minutes by car from the village of Lizy sur Ourcq.
The location is roughly between Paris and Reims. The autoroute A4 Paris- Reims has a exit/entry 7 km east of la Trousse.