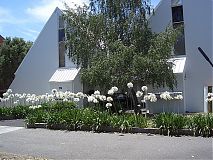 This stylish "A" framed contemporary apartment of the late 70's is one of 16 apartments (8 on either side of a central driveway) comprising two levels and a courtyard garden. The upstairs level has two bedrooms (one is a mezzanine open to the living room) and two bathrooms sharing one central toilet. Downstairs is an open plan kitchen/dining/sitting room with floor to ceiling double glazed, north facing windows opening onto an attractive Japanese styled, courtyard garden.

The newly renovated kitchen has AEG appliances and the second bathroom has a Miele washing machine and dryer.

Parkville is an historic inner Melbourne suburb adjoining the central business district north of the city and home to the gracious campus of The University of Melbourne and the Melbourne Cemetery. As it's name implies this suburb abounds in beautiful open parklands. Apartment "M" is situated on The Avenue opposite Royal Park and the Royal Park public golf course as well as the Melbourne Zoo. The housing along the wide open streets is a mixture of stately period homes, university colleges and modern apartments. Royal Parade, a treed, elegant boulevard runs parallel to The Avenue where frequent trams take only 10 minutes to get you to the heart of the city or to Flinders Street or Southern Cross train stations. From here you can catch trains to many parts of the city or into country Victoria.

If you prefer to walk, within half an hour you can be in the heart of the bustling cosmopolitan Melbourne city or north up Sydney Road where you can enjoy the pleasures of a multicultural shopping and eating district. Famous Lygon Street with it's many shops and restaurants is a stone's throw through the Carlton gardens. Beyond are the splendid Exhibition gardens and Melbourne Museum. A bicycle is available if you wish to take advantage of a cycle ride to St Kilda beach or along the Yarra bike trail.

Car useful if if travelling outside city.

Contemporary apartment with courtyard garden near ...

Central base for exploring the delights of Melbourne.